Created in under two weeks, the internet is bad is an art game about meme culture and the rapid expansion of technology. Enjoy good vibes, art, and memes.

Music: "Wiild" by Chahine, "i miss having sleep overs" by a l e x

Download, extract, and run the executable for ultimate nostalgia.

Thank you Vinesauce for playing!

i have a lot of work due in tomorrow and i have enough self restraint not to download and play this, but i do NOT have the restraint to stop myself procrastinating by writing this comment. 😬😬so here we are

game looks really good, will play it after work is done 👌

the internet IS bad

Thought the music was somewhat on point, didn't think their was enough significant memes bar a few that would actually make it worthwhile to want to go through it again the quotes were great, would have been awesome to experience the memes in a much more on point elaborate way with more explanation, thought etc . Controls were alittle clunky too.  Also the tapes didn't seem like they made a difference to the game probably did but wasn't really made obvious enough.

art was not bad in some places rather seemingly on point

but it was very low poly in a lot of places.

However I was entertained enough to wanna keep going more or less it did have that. 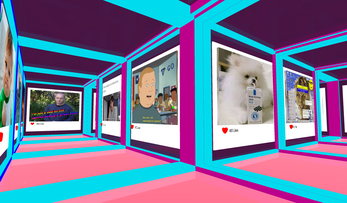